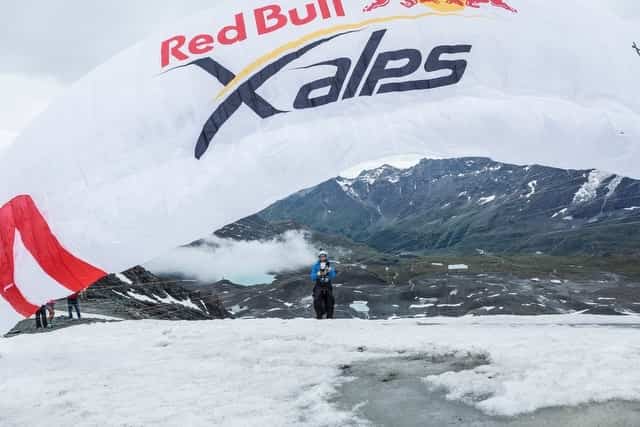 The birth and essence of
the world’s toughest adventure race

The concept for Red Bull X-Alps was inspired by Toni Bender’s first crossing of the Alps in 1999. His hiking and paragliding adventure became the subject of a documentary that caught the eye of renowned Austrian pilot Hannes Arch. This is what inspired Arch and his long-time friend Ulrich Grill to ask themselves if such incredible feats could be made into a competition for the most determined individuals on the planet.

„I thought it would be cool to base a paragliding competition on this format and build a basic concept for it – that’s how the idea was born!” Arch explains. “Together with Red Bull, we developed the idea until it became what it is today; an unparalleled test of human endurance in the form of an adventure race.” adds Grill.

Since then, the race has gone from strength to strength. Today, competitors cover over 1,100km of alpine terrain, sometimes racing through the night to gain an advantage. Although each year only a handful of the 30 or so competitors make the finish, the race only gets more competitive as the international athletes go head to head in the battle for glory.

2003 -From the drawing board to the skies

2003 saw the first edition of Red Bull X-Alps come to life. In its inaugural event, the race format was simple. A total of 17 top athletes set out from the Dachstein Glacier in the south of Salzburg and raced their way down to Monaco on the Mediterranean Sea. Along the way, they checked in at two mandatory turnpoints; Verbier in Switzerland and Mont Gros in France.

Of the 17 athletes who took part, only three crossed the finishing line; proving that Red Bull X-Alps was shaping up to be a race like no other. Completing the journey in just 11 day, 22 hours and 55 minutes, first place went to Kaspar Henny, who, back then was the three-time paragliding world champion for the Swiss national team.

In its second installment, a few key changes were made to the route. The Zugspitze mountain peak in Germany stepped in to replace Verbier in Switzerland as the first turnpoint of the race. The other major adjustment was the addition of Mont Blanc; Europe’s tallest mountain which would appear as the third and final turnpoint before Monaco.

As an exciting new development, 2005 also marked the first time that female competitors joined the race. Representing the ladies was Niki Hamilton of Ireland and Kari Castle from the USA. Three teams withdrew from the exhausting route, but it was Swiss athlete Alex Hofer who took the title from defending champion and fellow countryman Kaspar Henry with a time of 12 days, 1 hour and 20 minutes.

In its third edition, Red Bull X-Alps ramped up the route with a total of five turnpoints. In this race, Germany was dropped from the course and two new locations were added; Marmolada in Italy and the Eiger in Switzerland. 2007 proved to be the toughest yet. Of the 30 teams who participated, 12 were forced to withdraw due to injury and fatigue.

Alex Hofer once again took the podium after taking the lead in the last stage of the event. Hofer’s first class piloting skills allowed him to fly for 61% of the course, much further than anyone else had ever managed before. His victory time clocked in at just over 14 days, some 4 hours and 35 minutes ahead of Romanian endurance legend Toma Coconea.

In the 2009 race, Red Bull X-Alps once again welcomed 30 athletes to battle it out from Salzburg to Monaco. This time, the race would feature a total of seven turnpoints with two new stops along the way; the Grossglockner in Austria and the Matterhorn in Switzerland. The start point was also moved from the Dachstein Glacier to Mozartplatz in Salzburg’s city center, where an enormous crowd cheered the competitors on.

Switzerland’s Chrigel Maurer made his debut appearance at Red Bull X-Alps and claimed the title from Hofer who came in a day later to take second place. The two were the only finishers of the event in which Maurer set a new record for the competition at 9 days, 23 hours and 54 minutes.

With the addition of one more turnpoint in 2011, Red Bull X-Alps was back with another 30 teams of hungry athletes. Leaving from downtown Salzburg, they navigated their way between the Gaisberg, Dachstein, and the Grossglockner, before checking in at Drei Zinnen, Italy. Next up were the Swiss mountains of Piz Palü and the Matterhorn. From there, they made their way to France, stopping at Mont Blanc, Mont Gros and finally Monaco.

Once again, Chrigel Maurer emerged victorious, followed by Romania’s Toma Coconea. Despite a 24-hour penalty for crossing into a forbidden zone, Maurer finished with a time of 11 days, 4 hours and 52 minutes, nearly three days ahead of Coconea.

With a total of ten turnpoints and 31 competing teams, 2013 promised to be one of the most challenging races so far. Once again, the competition kicked off at Salzburg’s Mozartplatz where the teams would tackle the 200km longer route. Despite the distance, as many as ten teams reached the finish; accounting for one of the highest completion rates in the race’s history.

Chrigel Maurer took the top spot to secure his third consecutive win – crossing the line in a record time of just 6 days, 23 hours and 40 minutes. Frenchman Clement Latour would come in nearly two days later with the rest of the pack arriving over the next 48 hours.

For Red Bull X-Alps 2015, the addition of the all-new Powertraveller Prologue Race just a few days ahead of the main event gave the top three finishers a five-minute head start on race day and an additional Night Pass. This new development combined with the increasingly restricted flight paths made for a highly competitive field.

Chrigel Maurer continue his reign as the champion, yet again taking first place with a time of 8 days and 4 hours. Unlike previous editions, a record-breaking 19 athletes came in close behind the leader, making it a nail biting adventure to the very end.

On September 9, 2016, a short time before his 49th birthday, Red Bull X-Alps inventor Hannes Arch died while flying his private helicopter near Grossglockner.

The Red Bull X-Alps simply would not have begun or continued to exist without Hannes Arch. He helped shape the rules, select the athletes, and determine the route. Despite Hannes having his own public persona and career to maintain, his role as Red Bull X-Alps race mastermind was incredibly important for him on a personal level, and every single person who participated in or worked on a Red Bull X-Alps got to know his dedication to the event and the athletes.

He will continue to live on in the memories of his friends, family, and adventurers worldwide.

With seven turnpoints and a total distance of 1,138km, Red Bull X-Alps 2017 was both the longest and toughest race to date. The Prologue Race, (this time named the Leatherman Prologue), was restricted due to poor weather conditions. This forced the athletes to run the whole way in pursuit of an additional Night Pass and a head start on day of two of the main race.

Proving to be unstoppable, Chrigel Maurer took his fifth consecutive win against the other 31 competitors, achieving a time of 10 days and 23 hours. It was no easy victory though. Hot on his heels was rookie Frenchman Benoît Outters, who, as the only other finisher of the race, crossed the line just two hours behind him.

Quelle: With Thanks to Red Bull X-Alps