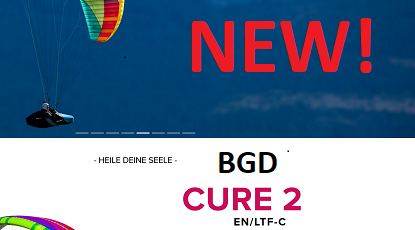 Soar to new levels of performance: embrace your passion, heal your soul! 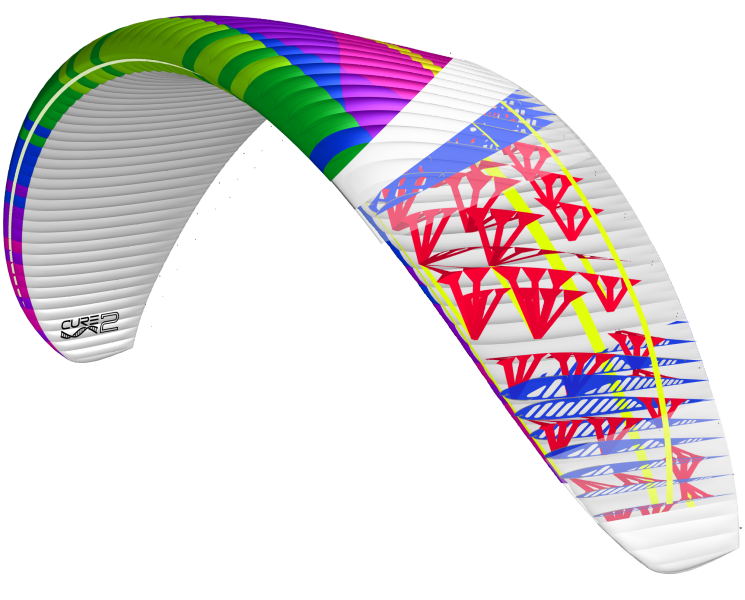 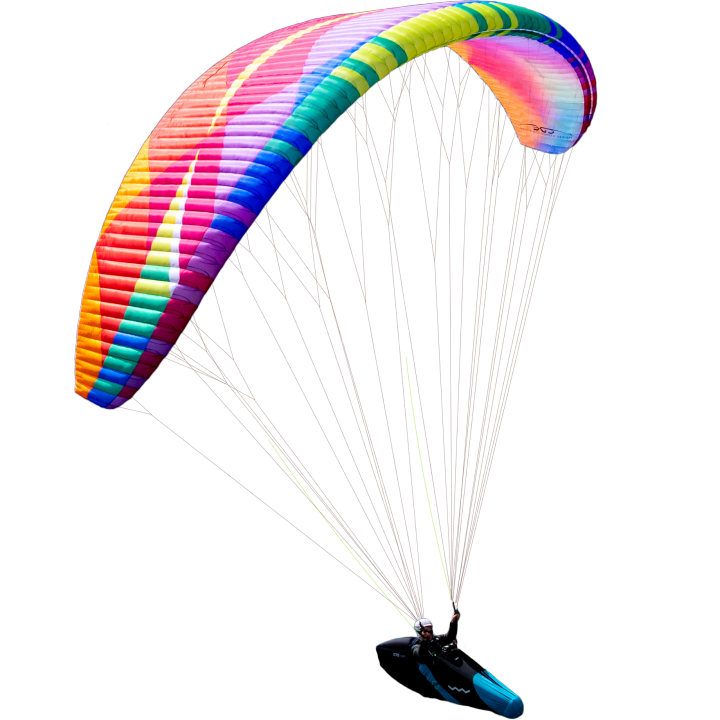 Disclaimer:
It seems that I’m also BGD villain…  😉
I couldn’t get a hold of one as our dealer received again, (a note) No Cure 2 for Ziad!
Cooldown guys !!  🙂  It’s the 21st century! And my last 2 BGD’s were purchased from abroad! …
Gliders sent only to a “controlled” environment is an underestimation of the good pilots out there in the world, especially with the presence of a large social media network.
I really regret BGD approach!
I wouldn’t want the dealer to have any problems, so I waited until the demo was finally sold to a friend (Northern Eagles Club) flying in the north part of Lebanon. I visited him, and he was so kind as to lend me his new toy.
I really hope that BGD will have more faith in the future!

BGD is a new company, created by the world champion, Bruce Goldsmith, that works with beautiful designs, cheerful colors, and with passionate young people working as a team.
The Cure 2 M launches easily in nil wind without any hardpoint. If the pull is heavy, the Cure 2 surges forward rapidly but can be swiftly stopped by the brakes. In a strong breeze, the pilot must anticipate and stop the surge. A good C pilot won’t have any problem.

The BGD Cure 2 in size M (75-95) feels slightly big to fly it at mid-weight but quite manageable in weak conditions. In strong air, I found it best at 94, 95 all up. The trim speed is fast for the C category. A bit faster by one km than the Q-light S, the Fusion S, and 2 km/h over the Delta 3, Alpina 3.
Flying with an X-rated 6 harness, the Cure 2  has a nice feel in the air!  Like the Cure 1, the Cure 2 is an agile glider, with slightly longer brake inputs than the Cure 1.

BGD CURE 2 The brake travel is quite moderate and smooth, not short and not too long. After 10 cm of slack, 30-35 cm is needed to steer the glider in any thermal. The Cure 2 reacts smoothly, and accurately, to the pilot’s controls. It has a linear response throughout the brake range. It feels similar to the Mantra 7 in terms of brake feel, and time response, with a slightly more agile turn.

In thermals, the Cure 2 can be steered tightly into the core. The turning radius is clean and the Cure 2 stays on its path during the climb. It feels like sniffing the thermal and it gave me a nice feel while coring. It doesn’t get out of the turn inside a thermal, and while pulling more or less brake, the Cure 2 reacts well, to position it inside the lift.

In weak conditions, the Cure 2 seems to cope well with the best C’s of the moment despite its high trim speed. (You can see my C companion updated for the Cure 2 if you need to see the smaller details).  A little adaptation is needed to keep the Cure 2 from diving into a turn in weak conditions. A little brake pull is needed and the Cure 2 will climb effortlessly.  I can confirm that the Cure 2 floats well.

The information is sent smoothly by the risers, not the brakes. The Cure 2 has a tamer feel is weak conditions, much like the M7 is that matter. The pilot must pay attention to the glider movements in order to feel those small 0.2 m/s lifts. But the Cure 2 can grab those tiny lifts with a good pilot underneath. In strong thermals, the Cure 2 moves a bit in yaw visually, but that doesn’t affect the pilot at all. I couldn’t feel the movements that were shown upward. It filters nicely the useless movements. When entering the strong lift, there’s a slight pitch back, when hitting the thermal, and slightly before entering, and then all you can hear is a screaming vario! The Cure 2 climbs really well and fast without too much control.
In turbulent and strong air, it needs an active good C pilot, just because the moderate brake pressure is less sharp than the Cure 1, the Delta 3, or Alpina 3 for example.
Flying the Cure 2 in moderate air doesn’t feel like a block over the pilot’s head, I felt it is a smooth and comfortable glider as it works by itself.  As the conditions liven up, the Cure 2 needs slightly more control power to keep it leveled or slightly more adaptation for the light and slightly moderate brake travel.  I felt the shooting forward is more pronounced than a Delta 3, Alpina 3, Fusion, Lynx, for example…But nothing difficult for a good C pilot. It’s easier to fly than the Trango X-race.


The glide part is here…
Gliding next to the top C’s of the moment, I was really surprised by the abilities of the Cure 2! I have tried many times, next to the newest and best C’s of the moment, even next to the Mantra 7 ! just to be sure, but to my surprise, the Cure 2 arrived higher than most C’s I have as a reference!
We all were very impressed by that glide, at trim, at first bar, and even at top speed. It seems that BGD has a new developer, as I have read on their website, with a new software tool for the R&D. I think the glide part is so obvious that any of you out there will notice it next to any C glider, or maybe this Cure 2 that I flew is magical!  🙂
The glide next to the Mantra 7 was so close for the 7 km run and was repeated again and again, and sometimes facing a sea breeze…The difference is only around 10-15 meters less for the Cure 2 ! The M7 is more stable when hitting turbulence and stays on the path without loosing in movements. But that’s a very good D!

The speed bar has a moderate pressure and while using it, the Cure 2 can be controlled quite efficiently by the C risers in moderate air. The C controls have more pressure than the Fusion or the M7 which has a light feel. The pressure on the Cure 2, C controls is on the moderate side.
Using the bar, the Cure 2 cruises efficiently in headwind conditions, and I could feel the speed and glide efficiency!

Big ears also surprised me by their efficiency! With a half pull on the speed bar, I could reach easily -4,5 m/s!  The ears don’t open by themselves, and sometimes it’s nice to get your hands off the outer A’s and still getting a -3m/s sink. A slight bar on the brakes and they reopen.

The top speed is around 16-17km/h over the actually fast trim speed.

Conclusion:
Despite BGD’s poor judgment toward my tests, facts will remain solid facts IMHO.  It’s pretty simple to switch off that ‘free to read page’ as fast as possible. No one will get hurt! 🙂
I’ll say again: When the 6.75 AR Cure 1 and Lynx were released, they were really pleasurable to fly, and I personally liked them, but there was some lower aspect ratio, C gliders that could have an edge over them in gliding power. BGD latest Punk, is also an adorable glider to fly, fast, climbs really well, but not on the edge of gliding performance in the high B category.    Who cares? I don’t.   But these are facts! that manufacturer must apprehend with a deep breath to cool down.
How could it be possible for every manufacturer to have “all” his creations better than the competition in “everything”?
That’s why underestimating the pilot’s abilities and comprehension should be a thing of the past in 2020.
I believe that choosing a glider only for its glide angle is wrong. I personally choose gliders that have a swift, sharp and better authority on the brakes.  The more pleasure I get is the way I personally choose. That’s me. Every person has his own demands and that’s the beauty of it. My friend adores the M7, and speak about it every moment. The other chose the Lynx and hammer his comments in my ear every second!  🙂

Now with the 6.4 AR Cure 2, the leap over the first version is truly remarkable, as the BGD R&D team, has reached a new level in the C category having the edge in gliding power! Congratulations!
The gliding performance of the Cure 2 is second to none! The handling and the way to steer the Cure 2 is good for the C category and gives enough pleasure. I would have wished for shorter and more direct brake control. But that’s me..I’m too picky…Many will love it. The climb is weak is also quite good.
I’m sure that the Cure 2 will deliver some epic XC flying with the right skills for that category. I already updated my C comparison for the little details.
In creating the Cure 2, BGD has outdone themselves. I really don’t know how they pulled it off, but that’s a solid fact and it’s already available for every pilot to experience it.