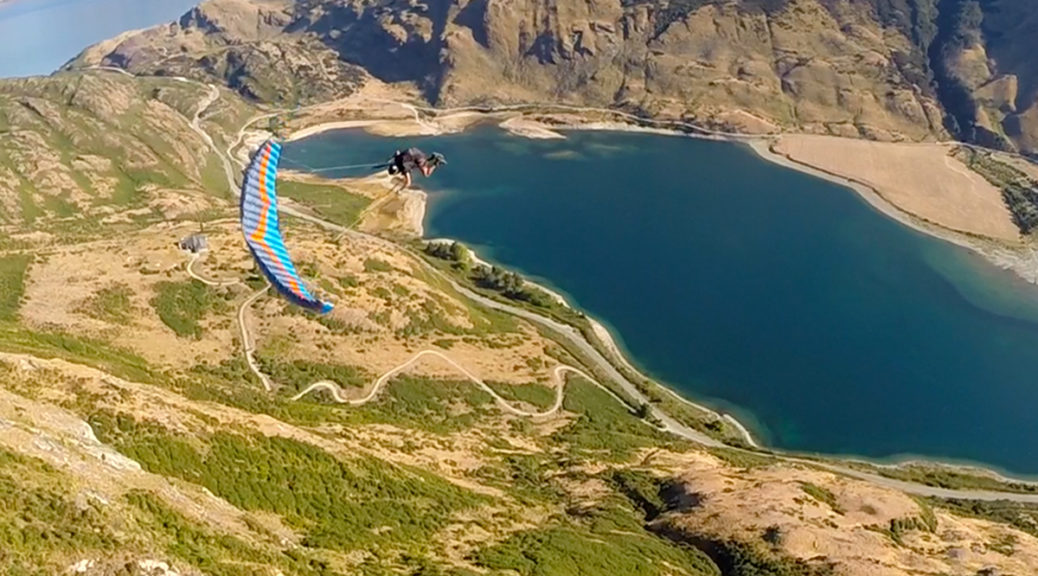 The Rapi-Dos is our highest performance speed wing designed for pilots who seek the ultimate in speed and swoop performance. It has the widest glide performance range of any wing we have ever flown, and handles incredibly steep angles as well as it does flatter-trimmed flight for transporting to different sections of your line, or accessing a distant LZ.

The Rapi-Dos employs a new profile which delivers enhanced stability at low angles of attack. This has allowed an expanded trim range for steep lines and high speed flight. Handling and responsiveness are improved throughout the glide range, thanks to new wingtip shaping and trim. The super low-drag line-plan of the original Rapido has been improved, pushing the top speed and overall efficiency higher. The trim system has been completely upgraded, with expanded range and easier adjustment with brakes in hand. At flat trim, the Rapi-Dos has excellent behavior for foot-launching, with early lift and a direct feel in the first part of the brake range.

The Rapi-Dos is, like its predecessor, is designed for speed riding pilots who already have at least one full season flying a highly loaded lower aspect ratio design, such as the Fazer series. Most of the Rapi-Dos’ features are designed to expand the horizons of an advanced pilot, including its stability in steeper lines, and Its swoop performance.

With sizes from 8m to 15m, we have you covered. The new 15m size is more accessible to a wider range of pilots, and also increases the range of soarable conditions with a speed wing.

Yes it’s faster. It’s the fastest. The Rapi-Dos 9m feels like the original Rapido 6! For me this means that the steeper lines are faster, but I still can trim it out and get further. The launches have been great, and the swoop potential is even bigger. So stoked.
-Jamie Lee

The original Rapido was a huge performer and is still an awesome wing compared to anything else out there, but the Rapi-Dos takes the sport to a new level. It is faster and more efficient – those are the things you notice first. What takes a little longer to understand is how awesome this wing is in active air, how precise the handling is, and the swoop landings are even better. We worked hard on expanding the trim range and I think we’ve got it to a pretty good place.
-Cade Palmer

I have been pretty surprised actually by how real the improvements are. The handling feels more solid and compact and the speed is way up. Jamie and I have been raging pretty hard on it this season and there have been no surprises, except for how much better it really is!
-Malachi Templeton