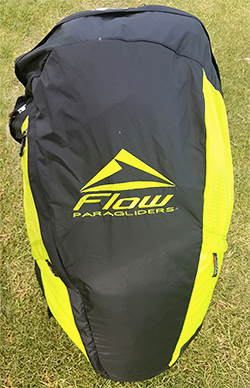 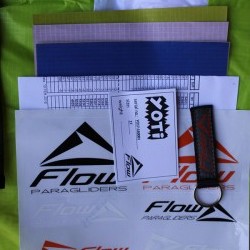 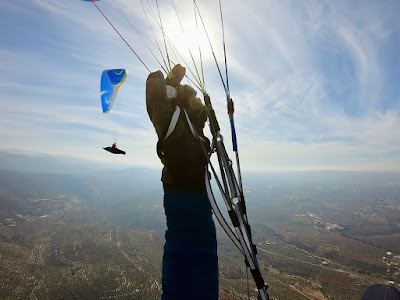 FLOW Fusion M
Flow is the new Australian brand. The XC racer is their EN-D 2 liner glider, and they released a beautiful new CCC, the Spectra.
The Fusion is their new EN-C glider.
My friend, lend me his M size ( 80-103 ) to test fly it. At first glance, I opened the package and saw a minimalistic line distribution, with a sliding B riser, and C control steering. That amount of very few lines means ‘performance’….Let’s see…
I ballasted up to 99 all up on the M, with my X-rated 6 harness.
Launching the Fusion with its 6.3 aspect ratio is a piece of cake. Steady pull, and no surge forward, after a small brake input.
Launching is immediate. I had already shortened the brake lines by 5 cm. That way only 7 cm of the gap remained when the brakes are released.
Full bar is achieved without any tension on the brakes.
The Fusion was flown next to an Advance X-Alps 2 M, Mantra7 MS, Delta3 ML, Q-light S, in order to understand how it performs in the same conditions.
The brakes have light pressure on the first 10 cm, then slightly harder when pulled beyond 35 cm. The agility is on the average side but ok. In mild conditions, the Fusion can be turned quite tight inside the thermals. The precision of the brakes are good in mellow conditions and slightly less in turbulent cores.
In stronger and turbulent air, I would have wished for more precise control, and slightly better pilot authority on the brakes, in order to put it exactly where I wanted. But as you know, I’m a bit sensitive toward brake authority when test-flying a new glider.
My friend ‘Amer’ who is a Rush 5 pilot, flew the Fusion and commented that it was one of the best handling gliders regarding sensitivity.
And my other friend ‘Sayed’ who is a Cayenne 5 M pilot, commented that it was mellow to his taste and was missing some little spices.
So different opinions for different tastes…regarding the brake authority.
I found it slightly less agile than the Delta 3 MS, and the Q-Light S, but turns flatter! and has this new ‘search, grab and hold’ feature to never let go of a thermal!
I was also very surprised about the mellow feel under this 6.3 aspect ratio glider! It’s really a very dampened C glider. Probably one of the most pitch stable and overall stable glider in the C category! In average conditions, and high B pilot would find it very easy to fly, as my friends ‘Amer’ and ‘Sayed’ both commented, that its a faster and more performant ‘Rush 5’ with practically the same comfort under it in moderate conditions…
Of course, in stronger air, it needs an active pilot control as the authority on the brakes diminish a little.
But IMHO, any good high B pilot will be welcomed under this C machine. 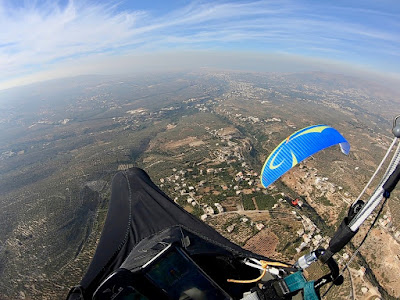 Now the interesting part is the performance in climb and glide. Flying next to those gliders mentioned above, I can confirm a good climb rate for the Fusion M. To be even more precise, i think in smooth weak conditions it floats nicely. Not the best one in its category but a very good one. The strong point in the Fusion climb rate is when there’s an influence of little wind or valley breeze. Even in weak thermals, the Fusion surfs the air and grab that thermal. The more valley breeze, the more efficient the Fusion is for a C glider. When the climb is well built, the Fusion climbs very nicely. There’s not any pitch movement in moderate conditions, to the point of wondering how the hell it is searching for that lift and climbing!
After trying some good glides with reference gliders in the C and D category, I was very impressed by the glide angle of the Fusion!
Not only the Fusion is trimmed fast but it surfs the air without any pitch behavior to deteriorate that glide. On the contrary, it searches smoothly and calmly with a positive vario the lift in the airmass. To describe it best, it looks like sitting comfortably in a (TGV)!
Flow has created its best glider so far concerning glide efficiency. The Fusion scores the best glide angle in the C category at trim speed and could match some recent D gliders, except the M7, and close to the best C’s at full bar!
I’m waiting for the S size, which could be hopefully more agile. Let’s wait and see…
The top speed is around 12-13 km/h over trim, with pulleys overlapping.
The C controls have a slightly moderate to hard pressure, but efficient to keep the glider in control in overall conditions.
ears are stable, slightly efficient and reopen with a little pilot input.
Conclusion:
I don’t know how they did it…But I think Flow has forged the Fusion with aboriginal magic!
An excellent glide angle for that C glider, and a high level of comfort.


BEST THANKS TO 🙂   Ziad Bassil at 7:46 PM
WEITERE GLIDER :
https://www.paragliding.eu/flow-freedom/