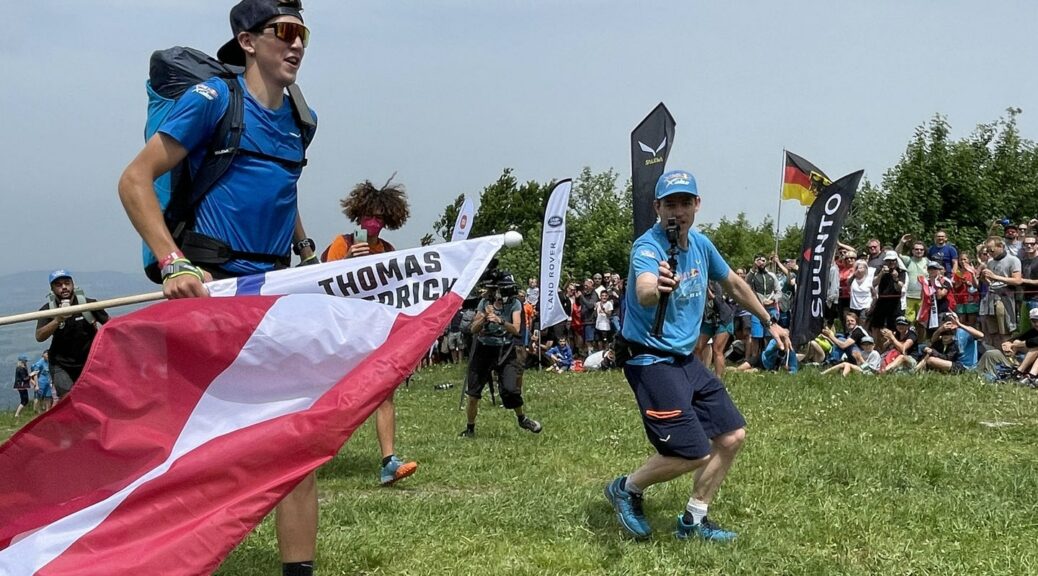 The day of the changing weather

It looked like a 100km day, but athletes were seen hiking and running a lot more than they may have expected.

Early this morning things were looking great for the 29 athletes of the tenth Red Bull X-Alps. They arrived early at the Mozartplatz in Salzburg and gathered in the hot sun baking the city, concentrating on their upcoming feat. In a great atmosphere created by cheering supporters, they set off to run op to their first Turnpoint Gaisberg.

The weather was forecast to be favorable, if sweltering hot. The latter came true, but for flying, conditions did prove to be very difficult today. Very early in the day, the wind was blowing uncommonly strong on top of the Gaisberg.

It was a close call, but the strong winds decreased just enough for the athletes to be able to take off and fly. Tommy was among the first ones, but the rest soon followed.

The scene was fascinating to watch from the ground. The athletes flew as if they were a huge team, moving from one side of the mountain collectively to another, just to find the best bits of rising air. As if on cue, they would all turn at the same time and fly as a flock of birds the other way.

Finally conditions improved and a large group of athletes got away and flew towards Wagrain-Kleinarl. But even though most expected to easily reach Turnpoint 2 in two hours, the first athlete, Maxime Pinot (FRA1) only signed the board after 4:30pm.

At the end of the afternoon, the weather gods were kind to the athletes. The forecast strong winds had not arrived yet. A large group climbed the west face of the hills behind Kleinarl, still led by Maxime who managed a short but important glide to the other side.

This brings him within walking distance to the impressive mountain range of Hochkönig where he will be well positioned for a good flight tomorrow. But at least ten others are on his heels. Some may also manage a quick flight before they have to stop for the night. Can Maxime increase his lead?

It shows again that the weather is the main factor in the race.

Follow the athletes for their last meters on day 1 of the Red Bull X-Alps 2021 on Live Tracking!

It’s tough out there

The story of the race so far can be summed up in two words: hot and sticky.

It’s been sticky in the air, with stable conditions meaning athletes have had to fight for every meter gained. They have been low many times, but have managed to work their way through the hills south of the Turnpoint at the Gaisberg as they make their way towards the Turnpoint at Wagrain-Kleinarl.

Along the way those not able to stick with the thermals have slid slowly but inevitably to the ground. Tommy Friedrich (AUT3) who started with a bang by reaching the top of the Gaisberg first has had one tough afternoon. At one point he was the only athlete on the ground while everyone else was in the air. That’s tough.

He landed, ran up to a small pass, launched and flew again, only to sink out and land again. At 4pm he was hiking hard through the heat of the day. This is where Red Bull X-Alps athletes must dig deep – Friedrich has had huge highs and lows today.

Meanwhile, out front, the athletes have teamed up, forming huge gaggles of paragliders as they work the lift and try to stay in the air. At times some of the lead athletes have tried to make a breakaway: Aaron Durogati (ITA1) and Maxime Pinot (FRA1) both made a move, but were caught by the chasing pack as conditions slowed them down.

These sticky conditions in the air and hot-and-sweaty temperatures on the ground have made for a nail-biting first afternoon of the Red Bull X-Alps. Despite the slower pace – there had been talk last night of reaching Kitzbühel-Hahnenkamm in a blitz of fast-paced flying – the competition has been nothing less than nail biting.

As 4pm local time approached the lead athletes passed the significant milestone of 1200km left to go. That means they have covered 80km of the course line already. However, many were scratching low in small, tight thermals as they struggled to connect with the bigger high mountain terrain. This afternoon of racing is far from over.