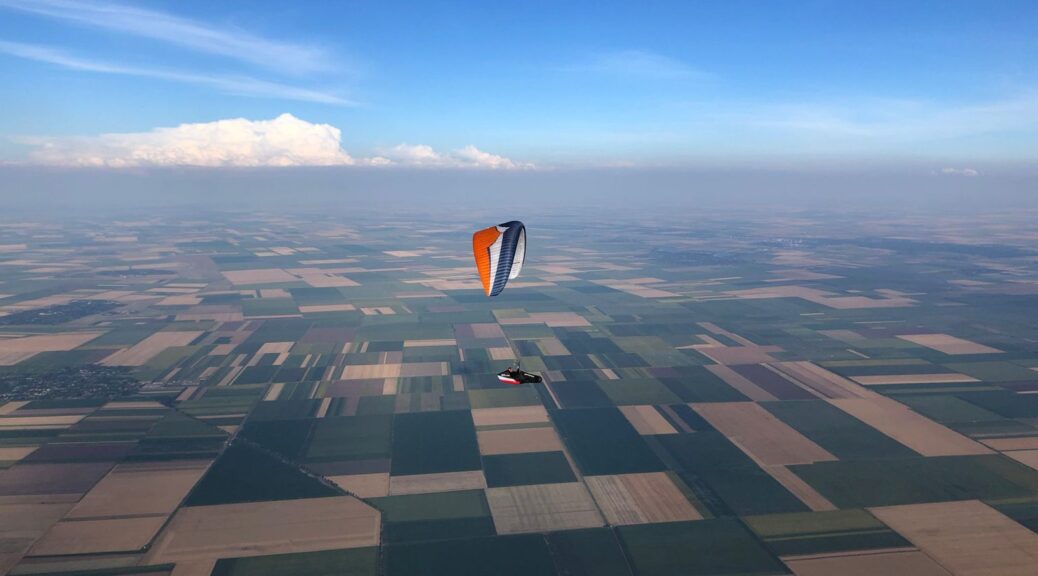 Flying with Igor was Stelian Popescu who flew 341.5 km on his Alpina 2.

“The first climb was consistent and turbulent, but it was premature to say we cracked “The day-workflow”. After 2 thermals, all pilots split in 3 groups, our group consisted of 7 pilots with B/C/D/CCC wings. Due to shear turbulence the thermals were shreded and it paid off to stay glued in Gaggle. We cried of joy as we hit together the 100 km mark after 2,5h of flight and some tricky low saves for some of us.

As I was on my Enzo, I announced the “Gang” that I will search for the next climb and wait for them in the thermal. I headed to a good looking Cumulus but it died and I found myself low and alone. Still I cruised at 70km/h covering distance and hoping to find something on my way. Soon I hit a 6m/s “screamer” that catapulted me to cloudbase. The mark of 200km was reached in the vicinity of my wife’s parents house, I thought: should I land? I will be culinarily spoiled but the odds unfold in favour of further flying.

I lost sight of my friends but soon enough, 3 of them, caught me up, which is in fact amazing as the pilots remaining airborne together were flying lower class wing, which proves that “Collective thinking” pays off and the Gaggle outmatches a higher rated wing. We saluted and I switch to buddy-flying mode extending our thermal sniffing capabilities. The wind intensified to steady 43 km/h, thermals of 2-3 m/s were soft-edged  so we could touch the previous national record milestone of 284 km being still at 1.900 m. ASL. Burst of happiness kicked in and we shouted happily as beyond that it was only the new Romanian record flight.

After 6 hours of flight, the thermals got weaker and it was time to squeeze each thermal and to drift with wind. At some points it was wiser to circle in -0,5 m/s still covering the ground with an average of 40km/h. We decided to set on the final glide at 310km from 1.950 m ASL, and due to evening restitution we had a +30 kms glide landing with a bit of bar pushed against the wind.

Congrats guys and cheers from all the Ozone Team.