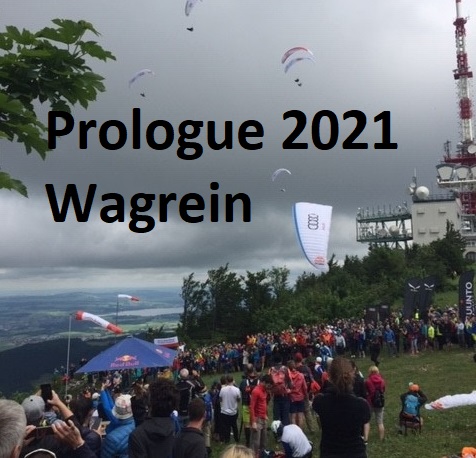 WATCH THE PROLOGUE ON PARAGLIDING.TV:

Penalties for athletes who missed Turnpoints

Two athletes received a penalty for not tagging Turnpoints in the correct way during the Prologue. Rookie Michael Lacher (GER3) missed TP2 by just a paragliders‘ length and Nick Neynens (NZL1) missed TP3 Hochgründeck by 50m.

They will have to delay their start on the second race day by three extra hours, on top of their time difference with the race winner, which was a half hour and an hour respectively.They weren’t the only athletes to struggle during the Prologue.  Aaron Durogati (ITA1) struggled to fly away from TP1 Mooskopf, after he arrived second running up. He bombed out, landing just below takeoff. He then had to walk back up and take off again. Théo de Blic (FRA3) also had to hike back up after landing early.

In the air, Aaron’s difficulties continued. He thought he tagged TP2 and flew on in a straight line to TP3. However, he discovered along the way that his instruments hadn’t registered his passing in the correct way. He turned back, tagged TP2 and moved on with his race. But these delays caused him to finish in a disappointing 26th place.

Gavin McClurg (USA1) experienced similar troubles, He said. „I was circling around for minutes, not in a thermal to gain height, but just to tag the Turnpoint.“

Nick Neynens meanwhile, doesn’t seem to be bothered much by his time penalty. Before the Prologue he said: „I’m not too worried about getting the Night Pass or having a fast time. Because if you’re slow at the Prologue you get to sleep in on the second day, which is fine by me. I just want to do it in a nice way, not huffing and puffing and bashing through the bush.“  Looks like he is getting that much needed sleep on Monday.“