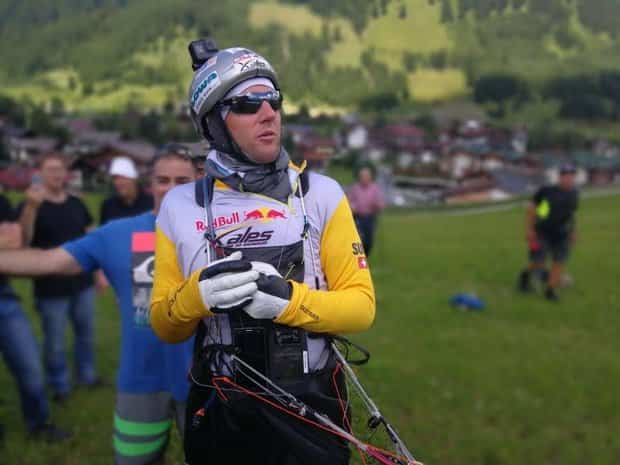 Christian Maurer (SUI1) arrived at Turnpoint 4, Lermoos Tiroler Zugspitz Arena, just after 2pm this afternoon, once again touching down on Austrian soil. Lermoos is in the shadow of the famous Zugspitze (2,962m), Germany’s highest peak, which he flew around on his way towards the turnpoint.

En route to Lermoos, Chrigel had to battle a strong west wind and spent much of the time flying in the lee. He sped up on the approach, however, reaching over 60km/h on his final glide. After landing, he said: ‘It was the most difficult flight of my Red Bull X-Alps career.’ When asked how he controlled his glider in such tough conditions, he joked in high spirits: ‘I pull this line for right and this line for left.’

He is now flying again, just south of Lermoos, and is 76km ahead of his nearest rival, Gaspard Petiot (FRA2).

He is being chased by the French pairing of Gaspard and Nelson de Freyman (FRA3). Petiot is 74km away from Turnpoint 4, while Nelson is 95km away, with a ground speed of 35km/h. Paul Guschlbauer (AUT1) is also on his way to Turnpoint 4 with 105km to go.

This follows the elimination of last place athlete David Liano Gonzalez (MEX) at 6am this morning.

The next elimination will take place at 6am on Friday, adding pressure to the athletes at the back.

Duncan Kotze (RSA) is battling with the Argentinian at the back. Duncan has 995km to go to Monaco, while Claudio Heidel Schemberger (ARG), who used his Ledlenser Night Pass last night, is 8km behind.

Race officials have announced that Stephan Gruber (AUT2) is out.

He has hurt his ankle through wear and tear. He was in 23rd position before he was forced to withdraw, 8km from Turnpoint 2.

Gruber said: ‚It’s both my ankles. I can’t walk and I can’t fly with them. It’s really hurting and has been hurting since Monday morning. I’ve never had it before, and I put it down to the cold, wet weather.‘

Day 3 of the race ends with Maurer back where he’s happiest – up in front with the wolf pack desperately chasing him down.

Well, he hung with the pack while it was not possible to fly. But as soon as those warm pockets of air started to materialise, everyone knew he’d do what he does best. And that’s a talent for finding himself at the right place at the right time and flying epic lines.

As of 20:00, Maurer had reached Turnpoint 3, Aschau-Chiemsee and had his sights on Lermoos Tiroler Zugspitz Arena, Turnpoint 4.

He spiralled down from a clear blue sky and landed next to the sign-in board where he was greeted by crowds of cheering fans. He started early this morning on the southern side of the Alps, and had hiked and flown for 12 hours, landing shortly before 7pm.

Meanwhile, behind him the French athletes Gaspard Petiot (FRA2) and Nelson de Freyman (FRA3) are enjoying the race of their lives, both completing epic flights over the main alpine chain.

For Petiot, his day began with an 1,300m ascent up Mangart’s northern flanks with Toma Coconea (ROU) to bag Triglav, Turnpoint 2. They arrived with time to spare before the thermals started. While Coconea signed t-shirts and agreed to fans’ requests for selfies, Petiot was swapping base layers and towelling himself off. “I feel like a tennis player,” he joked.

And the mental pressure was not far off a centre court either. As he agonised at the take-off over whether to fly, he confided to feeling the pressure with everyone watching. Both he and Coconea were playing the waiting game hoping for clouds to clear. In the end, they could wait no longer and launched into the mist. Unfortunately for Coconea, his flight did not last so long and his time at the front is most likely now over.

Throughout the day, most of the pack cleared the turnpoint. Of particular note was Aaron Durogati’s (ITA) rise through the rankings. Yesterday it looked as though he might be forced to retire with a painful knee, but then he got into the air and also showed what he is capable of. He was lying in fifth place with still an hour of flying left in the day, an heroic comeback from the back of the field.

Unfortunately it was not such a happy ending for Stephan Gruber (AUT2) who has retired with severe pain in both ankles. “I can’t walk and I can’t fly with them,” he said.

Meanwhile at the back, Claudio Heidel Schemberger (ARG) must take the award for dogged determination. He spent a very uncomfortable and cold night in the mountains and was close to hypothermia and in a bad state by the time his supporter found him at 2am.

But he’s determined not to be eliminated when the axeman comes down tomorrow and has pulled his Ledlenser Night Pass to fight on through the night – even though he only got three hours sleep last night.

The battle at the back is now between him, David Liano Gonzalez and Duncan Kotze. One of them will be out tomorrow.

Follow the battle at the back in Live Tracking.