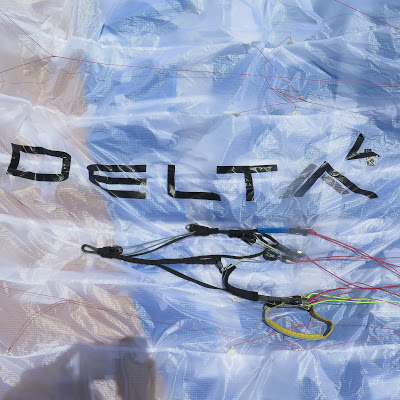 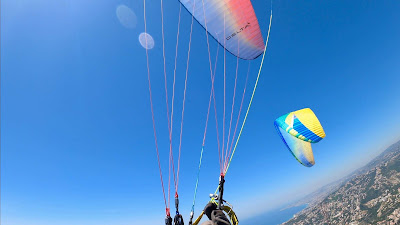 Ears‘ behavior is similar to the ML size. If you pull a lot, they will try to re-open,A little pull will get them stuck and stable, with a moderate decent rate. Wing overs are a delight! Get quickly upside down!
Conclusion:
I was super lucky after the corona lockdown to test fly some amazing gliders.
I also have to add that the Delta 4 MS has a more subtle feel, and a little bit more communicative than the Delta 3 MS in showing and sensing a little bit more the airmass. That characteristic is enhanced over the D3 and it’s a good move from the R&D department.
For the C category, what impresses me the most is when a manufacturer works on a moderate aspect ratio glider, like 6.05 for the Delta 4 and achieves an impressively complete package of feel-able passive safety, high comfort in turbulence, superb agility, with a pleasurable feel,top-end gliding performance and fast enough for the C category!
I’ll keep those new gliders coming through to see what could be more possible, and will keep one Delta 4 MS size as the new C reference. 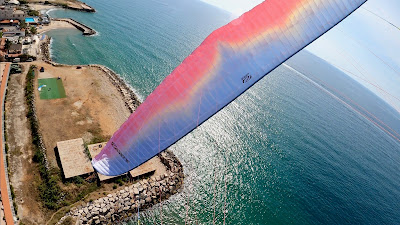 Comparing the same sizes:Mantra 7 MSVSDelta 4 MS, will give a tiny edge for overall performance to the M7, but I think Mantra 7 pilots must watch out carefully, Delta 4 pilots on full bar !! 😉
Posted by Ziad Bassil at 7:02 PM
https://www.paragliding.tv/videos/new-ozone-delta-4-en-c-now-available-in-2020/

OZONE has some of the shortest lead times in the industry. The current production time is approximately 45 days from order to shipping (updated daily). Contact your dealer to place your order.

You may choose to add something to your order, such as: Saucisse Bag (video) (concertina packing bag), Easy Bag (quick stuff sack), or OZONE Clothing and Accessories.

Ozone encourages you to customize your own personal colour combination for your wing. Customization generally incurs a fee. Once you’ve decided you can share your design with your friends, or if you are ready to order, send it to your local Ozone dealer to verify the charge and place the final order.

Please note that because the glider will be built specifically for you in the Ozone factory, payment must be received before production can begin.

Please be aware that the colour you see on your screen may not accurately represent the actual fabric colour. Secondly, different cloths specifications with the same color name may vary slightly, please see here for an example. Given the wide varience in monitor calibration and the fabric appearance in different light and colour combinations, it is impossible to perfectly represent fabric colour on screen. If you have any doubts about the colours, look at photos of various wings on our website to see them in different light and colour combinations or contact your local dealer to see the fabric in person.

All of the fabric that we use undergoes extensive testing in prototype colour phase to ensure colourfastness, mechanical stability, porosity, and general longevity before we put it into production. Once our fabric is in production, every meter of it is rigorously inspected upon arrival in our factory, and fabric which does not pass our stringent quality control standards is returned to the manufacturer. We are frequently asked, „Which colours last the longest, or have the best UV resistance?“ All of the colours that we stock score between 4 and 5 on a scale of 1-5, with 5 being the highest possible rating for longevity.

From back in March…. ⠀⠀⠀⠀⠀⠀⠀⠀⠀
⠀⠀⠀⠀⠀⠀⠀⠀⠀
„We just received the production sample of Delta 4 ML from our production. Every last detail is included, the result of many months of team research. It has not been an easy project, sometimes less than fun. Now, I feel like a customer opening his box for the first time. The sky looks fantastic, I feel the fever in my fingers. Airborne, they feel directly connected to the sail. I can sense a nice thermal in front, the wing searches for it and passes turbulence without sign of chord deformation. I pass a strong shear before the core, and add brake input: nothing deforms in the chord and the brake pressure is perfect, talking to me as if I were the airfoil. I’m inside, the wing turns with just a thought. Already gently banked, a stronger core is hitting my wing tip, so I try to catch it. The wing turns tightly on the tip with a nice yaw/roll response, I pull, and yet I can still ask for even more. I can’t but cry and yell my joy alongside my screaming vario. ⠀⠀⠀⠀⠀⠀⠀⠀⠀
Full bar now, riser control in hands, I feel like an eagle, my arms are my wings. I’m singing through the air. ⠀⠀⠀⠀⠀⠀⠀⠀⠀
⠀⠀⠀⠀⠀⠀⠀⠀⠀
I top land easily in the strong spring afternoon to check my phone calls. The order has just been given: Nobody is allowed to fly and possibly not for a long while. Covid-19 strict rule confinement. Is this the end of humanity?“ ⠀⠀⠀⠀⠀⠀⠀⠀⠀
⠀⠀⠀⠀⠀⠀⠀⠀⠀
-Luc Armant ⠀⠀⠀

The interview about the new Ozone Delta 4 with Ziad, dust of the universe:

Quelle with thanks to   https://www.flyozone.com/paragliders/de/products/gliders/delta-4