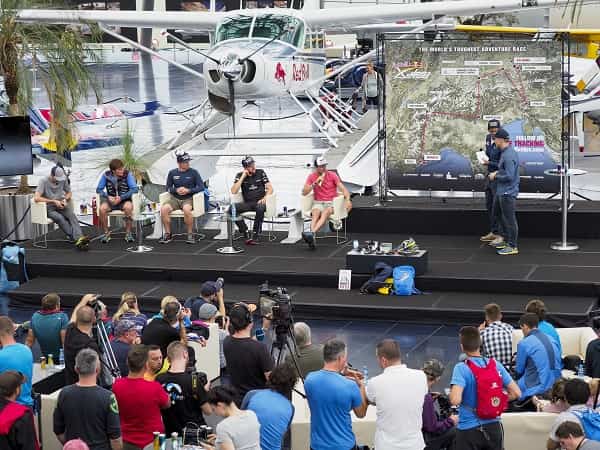 With less than 24 hours to go until the start gun fires in the historic city of Mozart, it’s the final chance athletes have to prepare for the world’s toughest adventure race – a 1,138km hike and fly battle via 7 Turnpoints across the Alps to Monaco.

This year, the route is tougher than ever, criss-crossing the main chain of the Alps a minimum of four times. Athletes first race to the top of the Gaisberg, a 1,287m peak overlooking Salzburg, before taking to the skies and flying 157km to Turnpoint 2, the peak of Triglav, Slovenia. From there the route goes northwest to Germany, then south to Italy before turning west towards Switzerland and France.

At least they’re hoping to fly. Weather conditions look set to be challenging meaning the race could begin with a battle on foot, adding an exciting new dimension to the race start.

Speaking at the press conference in Hangar-7, Austrian athlete Paul Guschlbauer said it could take two days to reach Triglav, Turnpoint 2, based on the current weather prediction from Morecast.

He added: “The Red Bull X-Alps is the perfect race for me. To be outside in the mountains, running and flying is what I love. Maurer is still the best in my mind and I look up to him, but it would be the greatest thing in my career to win this race. For me, or anyone else to push him off the top slot, would be a big thing!”

Four time champion Maurer, who missed the Leatherman Prologue due to sickness, said that he expected to be feeling at 95% at the race start and will back on form after a few days. “As long as I feel the fun and the spirit of adventure I am happy to compete. The most important thing is to have fun in the Alps. And make Monaco,” he added.

“The level of athletes I’m surrounded by is extraordinary,” said US athlete Mitch Riley, competing for the first time. “And flying in the Alps is unlike anywhere else on earth.”

“It looks set to be a great adventure race,” said race organiser Ulrich Grill. “This year we have the strongest lineup ever and it’s going to be so exciting to see who will make it to Monaco first.”

But with 1,138km to goal, the first challenge will be to make Triglav, Turnpoint 2. If it’s not possible to fly from the Gaisberg, Turnpoint 1, it could be a long hike, 157km long to be precise.