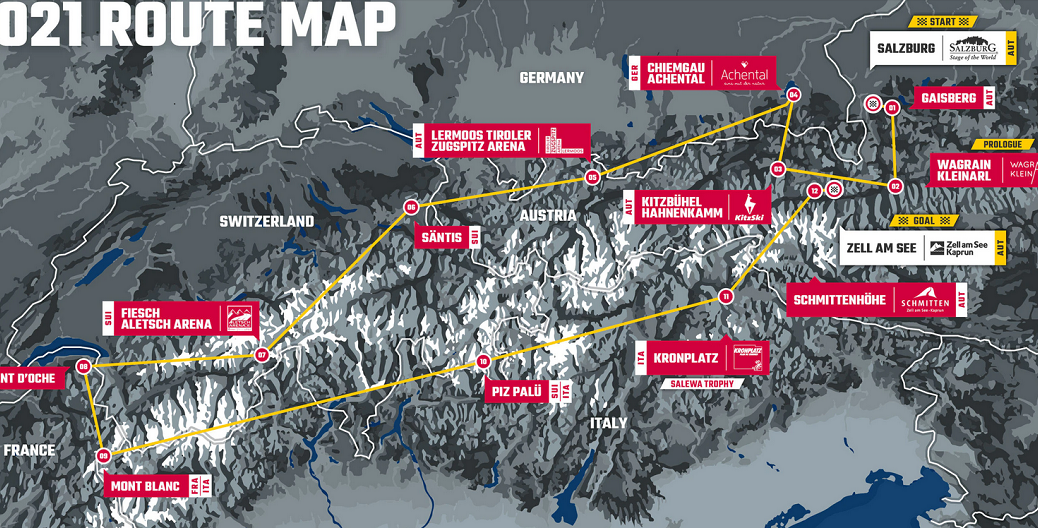 In a radical break from the past, the 10th edition of the Red Bull X-Alps is revealed as an out-and-back dash across the Alps, from Salzburg to Mt Blanc and back again to Austria via Germany, Switzerland, France and Italy. In a break from tradition, the race will not finish up in Monaco. Instead, the freshwater lake of Zell am See will substitute for the Mediterranean Sea.

Once again, the race starts in Mozartplatz, beside the statue of the city’s most famous resident. Athletes run through the city’s historic streets before crossing the Salzach river towards the Gaisberg.

It’s an 850m ascent and 4.7km run to the top of the Gaisberg, a 1,275m peak overlooking the city. The first athlete is King of the Gaisberg and typically arrives in about an hour. All athletes sign the signboard before taking to the skies.

It’s a 60km hike or flight to Kleinarl, part of the picturesque Wagrain-Kleinarl mountain resort. This year the signboard is situated in a football pitch in Kleinarl.

The upper section of the legendary Hahnenkamm downhill ski race is the site of this Turnpoint, which is situated near the famous Mausefalle (mousetrap) jump. A signboard means athletes have to land.

There are actually two Turnpoints here. Athletes first have to tag a cylinder within a 6km radius of the Chiemsee before landing at the signboard of Marquartstein 10km to the south. This area belongs to the scenic Chiemgau and Achental regions, part of the German Alps.

The route now goes into Switzerland. This leg is 117km and skirts to the north of the Alps. The peak of Säntis, 2,501m is the highest mountain of the Alpstein massif in north-east Switzerland and is situated to the south of lake Constance (Bodensee). The Turnpoint is a cylinder.

Fiesch is situated in the Aletsch Arena in Valais, and is home to Europe’s longest glacier, the breathtaking Aletsch, part of the UNESCO World Heritage site. To get here, athletes must cover 130km and cross the high mountains of the Bernese Alps. It’ll either be a spectacular flight – or a soul-crushing hike. Athletes must sign a signboard.

Dent D’Oche is a 2,221m peak in France’s Haute-Savoie on the southern side of lake Geneva. Athletes can follow the Rhone valley for much of the 108km but must then break north to pass the peak in an anticlockwise direction. Athletes have now passed the half-way mark.

The highest mountain in the western Alps makes another appearance as a Turnpoint in the race. However, in contrast to previous years, athletes do not just tag a cylinder but must pass the peak in an anticlockwise direction, forcing them to cross from France to Italy over one of the highest barriers in the Alps. Expect some difficulties if it’s not flyable.

From Mt Blanc the route opens up. The next Turnpoint is 245km away to the east, giving athletes different options – they can cross back north or take the shorter but possibly riskier direct line through Italy. Expect the field to diverge here. Piz Palü is situated to the south of St Moritz, on the Swiss-Italian border.

For the second time Kronplatz hosts a Turnpoint. It’s home to the famous Messner Mountain Museum and enjoys one of the most spectacular views of the Dolomites on one side and the main chain of the Alps to the north. It’s a great venue for spectators. Athletes have to land and sign a signboard, adding to the exciting atmosphere.

The last and final Turnpoint for those athletes still in the race is this 1,950m peak overlooking Zell am See. It’s just 88km from Kronplatz. From here, there’s just one final glide left.

All that remains is a final 5km glide to the landing float, this time situated in the waters of one of Austria’s most famous lakeside resorts. With camping beside the lake, it promises to be the perfect venue to finish the race – and for recovering afterwards.

Race organizer Ulrich Grill says the inspiration behind the new route was to do something different for the 10th edition and was not related to current covid regulations. “It’s an extraordinary route,” he says. “It will be a true adventure and one that athletes and fans will talk about for years to come. It’s the next evolution in Red Bull X-Alps race history.”

At 1,238km, it’s the longest route in the race’s history, 100km further than 2019. Race director Christoph Weber says: “It’s a new chapter for the Red Bull X-Alps. The race committee wanted to make the tenth edition of the race one to remember so we decided to break away from the past and design a completely new route; one where athletes will be geographically closer together. This will add an interesting dynamic to the race.”

The route will see 33 athletes, including three women, race across Austria, Germany, Switzerland, France and Italy, before finishing back again in Austria via 12 Turnpoints.

The race begins with a one-day Prologue on June 17th in the mountain resort of Wagrain-Kleinarl, 60km south of Salzburg. Athletes have to hike and fly a 30km course via three Turnpoints, with the three fastest athletes each winning an additional Night Pass.

Red Bull X-Alps 2021 – The Route and Video Paragliding.TV
The main race then begins, as in previous years, in Salzburg’s historic Mozartplatz. Athletes run through the city and up the Gaisberg (1,288m) to Turnpoint 1. From the Gaisberg, athletes head to Wagrain – Kleinarl, a mountain holiday town 58km to the south. This is also the location for the one day Prologue.

For the first time the race then heads to the famous alpine resort of Kitzbühel, Tyrol, home to the legendary Hahnenkamm downhill race, the scene of many epic deeds of courage, heroism and glory – values all close to the heart of Red Bull X-Alps athletes and fans.

From there, it’s a short 35km leg to north to Germany and Turnpoint 4, Chiemgau – Achental, a picturesque region amidst the northern Alps.

It’s then approximately 115km south west to Germany’s highest mountain, the Zugspitze, following a line that will be familiar to athletes who competed in 2017. Turnpoint 5 is on the Austrian side of the mountain, in the resort of Lermoos in the Tiroler Zugspitz Arena, the fourth time the resort has hosted a Turnpoint.

Turnpoint 6 is situated atop the 2,502m summit of Säntis, which lies to the south of Lake Constance (Bodensee) in Switzerland. Athletes then set their compasses for the high mountains of Switzerland and Turnpoint 7, the Fiesch – Aletsch Arena, home to Europe’s longest glacier.

By this stage athletes will have their eyes on the Rhone valley, an aerial superhighway that offers perfect conditions for flying distance – but only when the weather’s good. Athletes will hope it offers them an easy ride into France, otherwise it’s a long hike.

Turnpoint 8 is the 2,221m high summit Dent d’Oche, above Lake Geneva and Turnpoint 9 is Mont Blanc, the eighth time the iconic mountain has featured in the race. Uniquely, both Turnpoints need to be passed in an anticlockwise direction. That means athletes can’t just tag Mt. Blanc and return the way they came – they need to cross from the French to the Italian side of the mountain.

From here route options open up and we could see the field diverge. Turnpoint 10 is the Swiss peak of Piz Palü, 250km to the east. Athletes can either go north, rejoining the familiar Rhone valley or take a direct bearing passing to the north of lakes Maggiore and Como.

Athletes then pass the peak of Ortler, 3,905m, the highest mountain in the South Tyrol, as they make their way to Turnpoint 11, Kronplatz. Here athletes have to land and sign a board next to the famous Messner Mountain Museum.

For those who make it this far, the last leg should be a beautiful final flight across the main chain of the Alps to Turnpoint 12, Schmittenhöhe, which overlooks the resort of Zell am See and the finish line. Whereas the clock officially stopped in Peille above Monaco, this time, the race does not actually end until athletes make the landing float, whether they get there by landing directly on top, or swimming there. It promises to add a spectacular end to the race!

Evolution of a Route