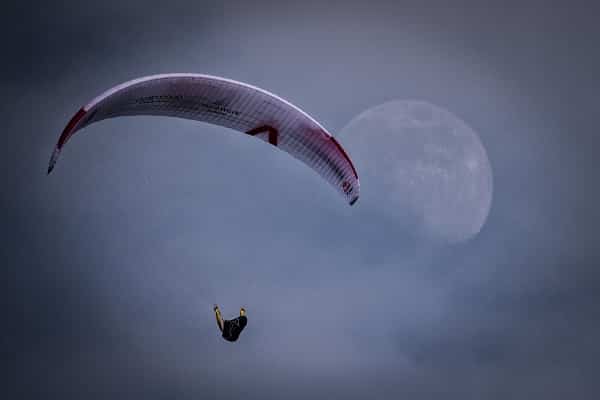 Athletes enjoy favourable flying conditions at Red Bull X-Alps 2017 – but only after brutal climb to 2,000m.

They waited and gazed longingly at the sky, hoping for a magical window when the weather gods would allow them to escape. The clouds swirled in, the sun disappeared, but in the end they could wait no longer. At 10:15am Gaspard Petiot(FRA3) and Toma Coconea (ROU) took to the skies in hot pursuit of Chrigel Maurer (SUI1) and Turnpoint 3, Aschau Chiemsee, some 179km to the north. The fight was on as day 3 of the Red Bull X-Alps adventure race unfolded.
Petiot and Coconea had begun the day early with a 1,300m gruelling ascent up the northern flanks of Mangart. Petiot, whose brother and sister were both there to support him, said yesterday’s flight in which he put in 100km in the air, was amazing. “You always hope for a big flight,” he said during a brief rest to change clothes. “But you never know.”
Not far behind lay Paul Guschlbauer (AUT1) and Nelson de Freyman (FRA3). Guschlbauer was in the air for the second time at 11:00am and swiftly caught them up, having tagged Turnpoint 2 in the air. He was followed by de Freyman and by lunchtime the pack was chasing Maurer, who had established a 40 km lead after tagging Triglav the night before and heading past the Großglockner, Austria’s highest mountain.
“It’s possible Maurer could pass Aschau Chiemsee,” Turnpoint 3, said race organiser Ulrich Grill. “The Drau valley is a famous long distance flying zone.”
Tomorrow, Wednesday 5th, the team lying in last place at 6 am will be automatically eliminated. To avoid that fate, Claudio Heidel Schemberger (ARG) has announced he is pulling his Ledlenser Night Pass. He was the first to be eliminated in the 2013 edition of the race so will be looking to avoid the same fate.
The battle at the back has begun, and it could be nervous times for David Liano Gonzales (MEX), Duncan Kotze (RSA), as well as Che Golus (AUS), Stephan Gruber(AUT2) and Richard Brezina (CAN), who were all lying within 40km of each other early afternoon. Follow all the action on Live Tracking on www.redbullxalps.com