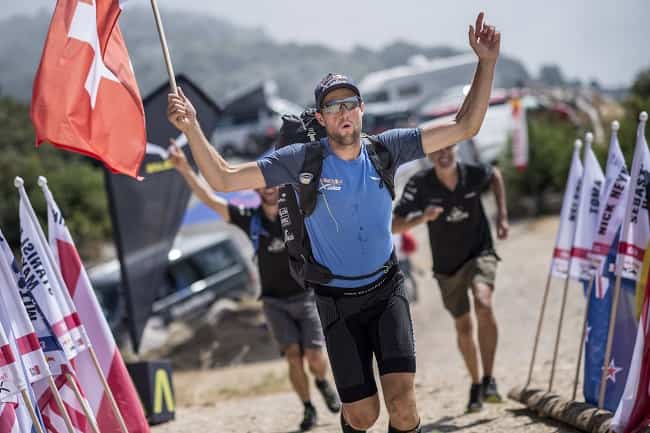 Christian Maurer (SUI1) this morning arrived first at 10:53am in Peille, the final turnpoint at the Red Bull X-Alps 2017. With his arms aloft, he ran the final few metres to the turnpoint sign where the clock officially stops. After setting off from Salzburg it took him 10 days 23 hours and 23 minutes and for him it was the hardest race in his career, a race that saw him start with an illness and finish with a knee injury.
Along the way the Swiss adventurer battled bad weather, got flushed by a thunderstorm and at one point found himself trailing in 21st place. He said: “I felt a lot of pressure this time and it started badly. And with the wind, rain and thunderstorms, I’ve never faced such bad weather in the Red Bull X-Alps before. But above all it’s an adventure first and foremost, not a competition.
“But I’m very happy to be here. For my knees, it’s good to be over. They never had to work so hard. This is the first time I’ve hiked over 500km, normally it’s more like 300km. Right now I’m just looking forward to being able to relax.”
Race Director Christoph Weber said: “It’s an outstanding achievement. Tell me another athlete who’s dominated his sport for eight years like Maurer has. This year was also a much more punishing course and the weather made it harder for him. He excels in the air, but had to hike much of the last 200km, so it was not easy for him at all.”
Benoit Outters (FRA4) was next to make Turnpoint 7 at 12:42pm after a time of 11 days 1 hour and 12 minutes. The Red Bull X-Alps rookie landed at the turnpoint after flying the last section and received a hero’s welcome from fans. Amid emotional scenes, he fought back tears as he hugged his mother and supporters before spraying everyone with a bottle of champagne.
“I am very happy, it’s incredible,” he said. “I knew that to reach Monaco I’d have to walk these last two days. So much walking. I’m exhausted, but very happy to be here.”
To make Monaco, Outters pulled off an extraordinary feat of endurance, running 192km in two days.
As is tradition, his and Maurer’s race is not over until they make the ceremonial – and untimed – flight to Roquebrune, which will take place approximately at 18.45 pm tonight due to city regulations that restrict the flights to set times of the day.
Paul Guschlbauer (AUT1) is currently third and lying 71km from goal. With Stanislav Mayer (CZE) another 70km behind him, his podium place was also looking good, but whether he can make Monaco before the race ends at 10:53am tomorrow is another question. He still has 70km to go, and with no Ledlenser Night Pass available he’ll need to put in a heroic effort to make it.
Elsewhere in the field, the start gun has fired on putting in as much distance as possible before 10:53am tomorrow. And it’s no less brutal at the back. This morning saw a bitter fight to avoid elimination between Tom de Dorlodot (BEL), Mitch Riley (USA3) and Jesse Williams (USA2) who were all pursuing Evgenii Griaznov (RUS), who had a narrow lead. In the end Griaznov put in a strong run this morning to get just 300m ahead of Riley who has now been eliminated.
Among the mid-pack, it’s all or nothing as athletes attempt to make one last flight that will push them up the rankings. There’s still everything to play for.
Stay tuned to Live Tracking to watch the drama unfold on www.redbullxalps.com.