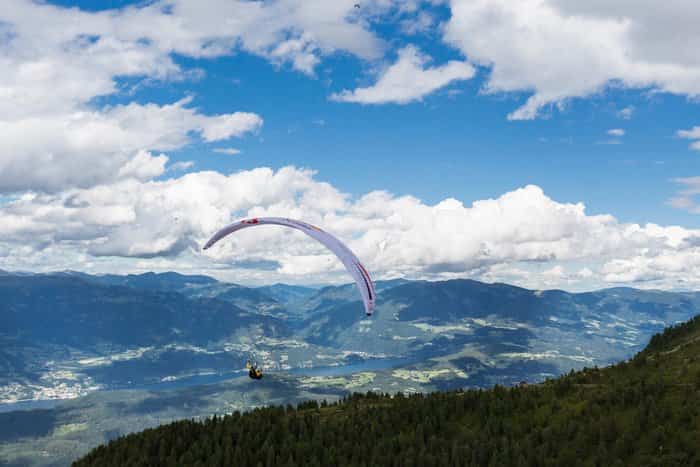 If Day Two started slowly, it certainly made up for it as the afternoon progressed. Maurer (SUI1) surged from 22nd place into the lead to pass TP 2, Triglav, crushing the all-day lead that Coconea (ROU) had established after hiking through the night.

For most of the day the lead athletes had been pinned down on the approach to Spittal an der Drau. Strong winds on the Hohe Tauern main ridge made taking off precarious and not every athlete was happy to chance it. For those that got away, the rewards were high.

Athletes such as Sebastian Huber (GER1) and Jesse Williams (USA2) could only watch as they flew overhead. But sometimes the right decision is not always the most obvious one. Late in the day Antoine Girard (FRA1) announced that he is retiring from the race after injuring his knee during take off.

He was attempting to launch his paraglider when the afternoon wind conditions caused him to misstep during take-off. The result was a sprained knee.

Antoine Girard is an experienced adventure paraglider pilot, who has competed in two previous Red Bull X-Alps races, in 2013 and 2015. He finished third in 2013 and fourth in 2015.

If the day began with the story of Toma Coconea, it ended with Chrigel Maurer. Having started the day an hour behind the last team in 22nd place, by the end he’d managed to fly into the lead and tag the second Turnpoint of Triglav in the air while the others struggled on foot.

Who could stop him?