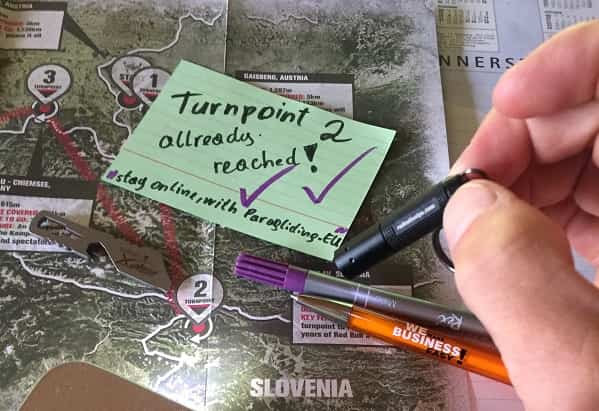 “I had a super great day,” said Gaspar Petiot (FRA2), who is in the top three and just 8km from Turnpoint 2 in Slovenia. “When I started this morning I was last.”

dventure racing and paragliding is about making decisions, and today was a day to make the right ones. Conditions for flying in many places were marginal, with strong and turbulent wind making launching difficult and flying extremely challenging.

“We are slow on foot,” Petiot said, “but I knew if we could launch and fly then we could do something with the day.”

His trick he said was to launch before the main spine of the Alps as he could tell that conditions on the south side were too strong and turbulent to be safe.

“My first flight was short, but my second one at 2pm worked and I managed to fly a long way. I don’t know how far but I was in the air for five hours with the wind behind me.”

To top off his day, he launched again, made further distance, and landed shortly before the official land-by time of 9pm.

Tomorrow I hope to climb the west ridge of the mountain, reach the take off and then wait until conditions are good for flying. Petiot and his supporter are both mountain guides and they know that of they climb straight up the rock rather than take the trails, they will be faster.

“We need to get permission from the race director but we are happy it is a good route.”

Another athlete happy with his decision making today was Chrigel Maurer (SUI1). The Swiss athlete started in 22nd place and flew into first, tagging the second turnpoint before heading back north towards Aschau-Chiemsee in Germany.

“The flying was amazing,” Maurer said after he had landed. “I had one flight this morning,” he said, “which was short but very efficient.”

“Then after launching again in the air it was working well. But in Goldeck I made a mistake and switched sides into the lee. That meant I had to land and walk up again.

“From there it was amazing flying. Approaching Turnpoint 2 clouds formed below me, like fog, and out to the west big clouds blocked out the sun.”

Without sun, there are no thermals, and that makes flying in the mountains doubly-difficult.

“The west side of the mountain wasn’t working, so then I switched to the east side and found I was able to soar.” Using just the wind against the mountain face, he managed to stay aloft, surfing it like a wave.

“That was amazing, but it was very hard work. I managed to cross over the ridge line with just 20m to get to the turnpoint.”

Pushing back north he landed near the small village of Obervellach, where he was met by his supporters and ate a quick dinner before walking into the evening.

“In the morning I will walk up to a launch. I hope to get to Greifenburg and launch around noon,” he said.  Greifenburg is a world famous paragliding site.

Deciding not to fly is just as important as deciding to take off. So it was with many pilots today, who looked at the conditions and decided to go head down and stick to hiking.

Michal Gierlach (POL) hiked all day and chose not to fly today. “The wind was a poor direction, strong, turbulent air,” he said from the mountain.

“We are hiking high this evening to stay in a hut at 2,400m. I’m with a group of about six. My legs are tired but everything is fine. I hope to get a good rest tonight and then we plan to try to fly from the hut in the morning.”